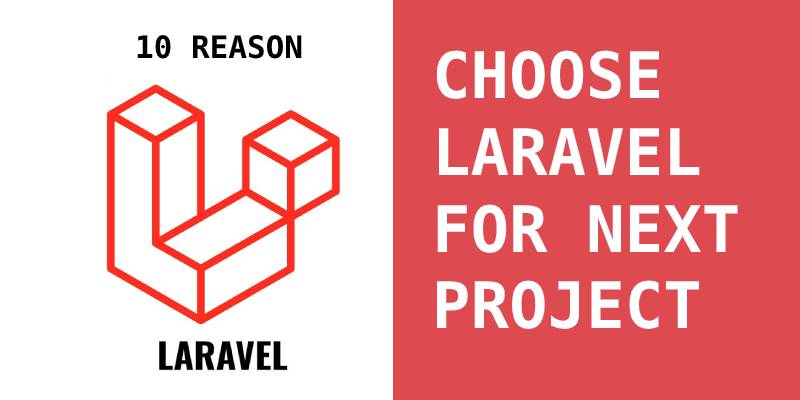 You can always consider writing web applications in PHP 7 to avail a number of new languages features, along with enhanced performance and reduced resource consumption. But you still need to pick the right PHP framework to write custom web applications in PHP without putting extra time and effort. Based on the specific needs of the project, you have option to choose from several open source PHP frameworks. So why not Laravel PHP Framework.

The usage statistics posted on various websites depict that a large percentage of web developers prefer Laravel to other PHP frameworks. Like other PHP frameworks, Laravel also comes with a number of features facilitate rapid web application development. But it enables developers to keep the application maintainable by writing clean, structured and reusable code. Also, Laravel scores over other web frameworks due to its advanced features and development tools.

Like other popular PHP frameworks, Laravel PHP Framework also supports model-view-controller (MVC) design rule. Hence, you can simplify development of large and complex web applications by keeping their user interface and business logic layers separate. At the same time, Laravel comes with Blade template engine. You can take advantage of Blade to include plain PHP code in the view and compile the views into PHP code. Hence, you can enhance the website’s performance by compiling the views into PHP code, and caching the code till the views change. Blade further makes it easier for you to display data and extend layout without affecting the application’s speed.

Laravel PHP Framework comes with built-in Eloquent ORM. The ORM system enables you to work with databases through ACTIVE Record implementation and perform common database operations through the model. Hence, you can simply define the model and perform common database operations without writing complex SQL queries. At the same time, you can also take advantage of Laravel database migration to synchronize databases running on different development machines.

You can easily enhance the performance and modularity of the Laravel by using events. You also have option to use events for creating class subscribe and listening to the events in the website. The feature will help you to monitor the events occurring in a website, and execute specific tasks as and even a particular even occurs. You can further add or remove the tasks to be executed based on specific events by writing custom functions. The latest version of Laravel allows you to define events as an object.

You can easily enhance the performance and speed of the Laravel through queues. You can use queues to post-pone execution of lengthy or time-consuming tasks. The postponement of time-taking tasks will make the application execute normal tasks quickly, and respond to user requests more efficiently. The version 5 of Laravel allows you to represent queued tasks as command objects. At the same time, you also have option to integrate the queues with Amazon SQS, Redis, Beanstalkd, IronMQ and similar queuing services.

You can take advantage of the basic caching system provided by Laravel PHP Framework to accomplish simple caching tasks like storing objects in a database or file. At the same time, you also have option to integrate the web framework seamlessly with popular caching systems like Redis, APC and Memcached. Hence, you can easily enhance the performance of large scale web application by integrating a robust caching system into Laravel.

In addition to providing a basic caching system, Laravel also supports route cache. The new feature included in Laravel 5 allows you to accelerate the route registration process. You can register various routes by using a single artisan command (i.e., route:cache). You can even take advantage of the feature to enhance the performance of websites that deal with a higher number of routes by implementing route caching. The feature makes the PHP applications deal with more than 100 routes in a fast and efficient way.

Laravel supports HTTP middleware. The middleware adds extra layers to the HTTP route. You can further use the route middleware to execute specific routes in the applications in a more efficient way. Also, the middleware allows you to test and remove individual request, and remove all conventional layers. The feature makes it easier for you to optimize the communication between the web server and your application without using any third-party tools.

Laravel allows you to assess a specific feature or functionality of the web application by performing unit testing through PHPUnit. It further sets the phpunit.xml file up by default. Hence, you can simply write test cases and perform unit testing throughout the development process. At the same time, Laravel further allows to define custom test methods according to specific testing requirements of the project.

Laravel 5 is designed with native support for multiple file system through a third party package -Flysystem. The feature enables the PHP web developers to simplify configuration by using both local and cloud-based storage option. Also, you have option to customize the configuration through either filesystems.php or config.php. The feature will make it easier for you to keep the APIs consistently by choosing from several drivers.

You can further use Laravel 5.3 to avail a number of new features – scout, echo and passport. You can use Scout to facilitate driver based full-text search for Eloquent ORM, Echo to work with WebSockets more efficiently, and Passport as an OAuth2 Server to simplify API authentication. These new features will help you to enhance the web application’s functionality, performance and security.

Tags:ApplicationDevelopmentLaravelLaravel Frameworklaravel login and registrationReasonsTopWeb
previousImportant Performance Optimization Tips For Laravel Developers
nextWhy Should You Choose Laravel For Your Next Web Project?